In August, we went on an epic 10 day trip to Normandy to undertake the Explorer Belt. Doing the award involves travelling around another country carrying out different projects as you go and keeping a diary of what you got up to. We chose to go Normandy as there is a lot of history to explore with the D-Day landings and it is a very beautiful place. 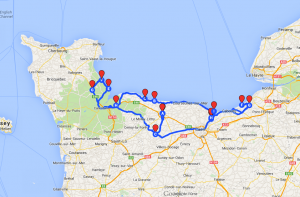 We took the ferry from Portsmouth to Caen on our bikes and we used our bikes as our mode of travel for the whole trip. All the equipment we needed was packed onto the bikes using pannier racks. To cover more ground and see more of the sights, we moved around Normandy staying at 6 different campsites in the 9 nights, some stays were 2 nights and some were 1.

The Explorer Scouts were divided into separate smaller groups for the trip and were therefore all in charge of their own equipment, food and money and getting themselves from site to site stopping off to visit different towns and places of interest, which was a very new experience for them. 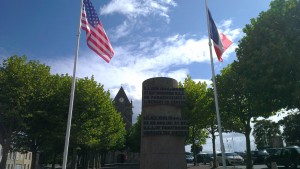 Here are some extracts from the diaries and pictures from the trip to give you an idea of how it went: 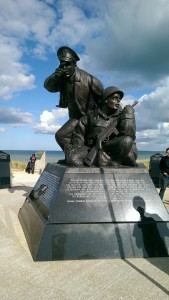 On the first day we drove to Portsmouth and loaded our bikes on to the ferry, shortly after boarding the ferry we were briefed about the safety aboard the ship and given our room numbers. The curfew for us was 11.30 so we only had half an hour after the briefing until we had to go to our allocated cabins for the night. 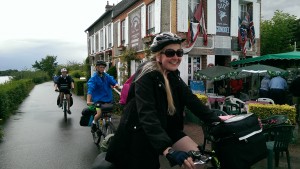 After an unpleasant awakening on the boat by very annoying music we got up and had an English breakfast. Once we unloaded our bikes off the boat at 5.30 am we set off on our 35km ride along the coast. On the way we past various D-day landing sites, we stopped at a nearby supermarket (5km away from the ferry) to get our dinner and lunch. As soon as we arrived at the campsite we went swimming and played table tennis until it was time to go to bed. 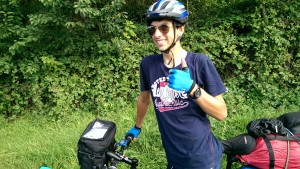 Today was a small cycle in as we were only visiting Omaha beach and the museum, to start the day we popped into the supermarket nearby to get lunch which consisted of taramasalata and pitta bread. Omaha beach was good though cold due to wind and sideways rain. All of this was forgotten about when we stopped at a café to have a coffee. 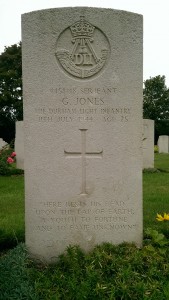 At the museum and memorial graves we saw the graves, honestly I was taken away with the size of the graves they just seemed to go on forever. After that we headed back to the campsite and for the rest of the day we played table tennis and air hockey. 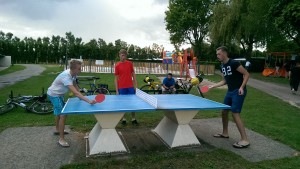 Today we woke up rather early and briskly packed the tents away and had breakfast. it was a rather long 50 km ride to the campsite but it wasn’t the most hilly ride ever so it was possible with a bit of effort put in. It was a rather uneventful day for my group as we didn’t see a lot of possibilities to stop that day but as usual the scenery was in itself a pro of the ride. 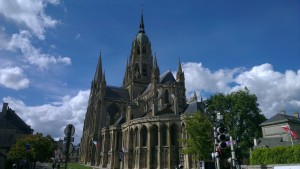 Around ¾ of the way to the site we saw a Lidl and thought this was a good opportunity to grab some food for our dinner and breakfast the next morning. We went in grabbed our dinner which was burgers some doughnuts for dessert and a couple of snacks for in-between that time and the next morning. Briskly after exiting the shop (and barbarically shoving far too much food into our panniers) we came across the leaders sitting outside a ‘ahem’ cafe. We stopped to say hello (and totally not to double check our route which we were unsure on) and came to the conclusion that we should cycle with them to the campsite. We then set of after the leaders finished their ‘assorted beverages ’. 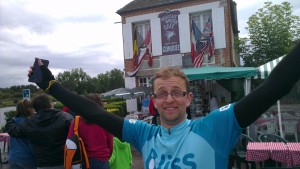 We then got to the campsite, put up our tents, cooked food and did all the other things which were soon becoming a ritual of sorts after repeating it so much.

After me Ben and Charlie dipped into our already low running money for a splendid cappuccino in the campsite cafe we set off with haste to Saint Mare Eglise. During the ride we had the first of Ben’s angelic voice boosting our morale we upped our average speed from 15km (the previous days) to 20 km. 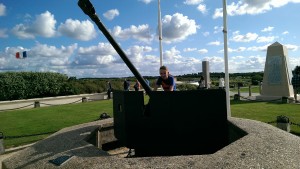 Shortly After being told this information by Ben from his speedometer our happiness was soon cut short as the leaders speeded past us in their usual nuclear driven way. After about an hour of riding we made it to the town and had a look in the chapel it was very beautiful with its majestic statues and flickering candles and had a very cute atmosphere to it. The chapel was especially famous due to the fact that it has a memorial/statue that is a paratrooper on the side of the church that is there permanently. 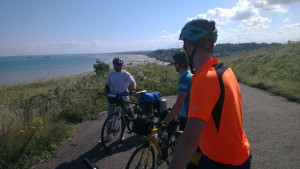 After looking around the church we meet up with the other group had a quick look around a couple of shops and had a lunch of sandwiches and other things at a local cafe.

After our lunch we made a beeline for the campsite and when we got there we set up tents and had a rather long swim to reward ourselves for the cycling and after all… we’re on holiday.

Early start for a short winded day, nevertheless I had washing that needed doing. After parade we set off. An okay day muscles are still intact, had no shorts today but I faired alright. However a long cycle for tomorrow. Saw some sights in the town, pretty decent day, had some laughs, and visited the Bayeux war cemetery. 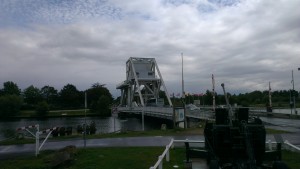 Today was a little different, well, a lot different. After to being used to travelling with my comrades Jack and Denver we were split up and I travelled with the little ones, there not even 15 yet. As well as the little ones we travelled with the leaders. We made fairly rapid progress across country we then made a stop at ville sur mere. We then reformed our groups. We got a bit lost but arrived safely at about 8:00. As far as sightseeing goes, we visited Pegasus Bridge. There was a house that was the first to be liberated by the 6th airborne division. As for the bridge itself I am unaware of the significance. 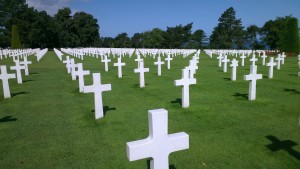 Today was different from the other days as today the five younger ones including myself cycled with the leaders. This was to judge the older ones ability. I consider it to be the hardest cycle of the camp so far! 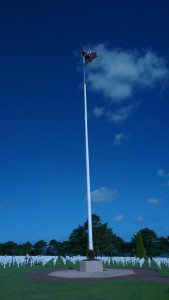 There were many steep hills, long main roads, and awful weather. Considering all of these factors I thought I did rather well. We made a few pit stops along the way; we even enjoyed a hot chocolate! For the first time since we left, we met with the other group at Pegasus Bridge, an important place in the liberation of France. Later, we traveled to a nice seaside town called Deauville, and they had the best bakery I have ever seen, with delicious chocolate muffins! After a short wait in town to let the rain past, we were back in our previous groups. We cycled to the campsite and settled down and got a much needed rest! 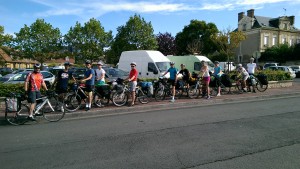 If I could describe peace, I would use today as an example. Every group decided to head down to the beach next to Doueville for a day to kick back and relax! As a rather pale white boy I saw this as a chance to tan. Did it work? Nope. Anyway, we decided to lay down for a bit before messing around with a Frisbee. 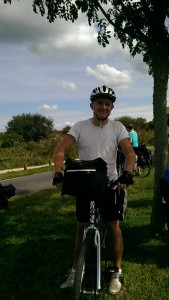 We got lunch after at a local stand, which tasted pretty amazing for what it was worth. After, we headed back to shower. While the others went to play ping pong, I thought I could have a nap, catching up on my lack of sleep the night before. A simple pasta dish before we got tucked in to go to sleep. 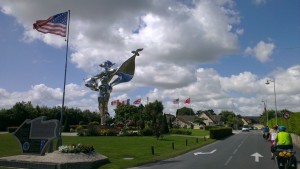 We were all woken up at 7:45am, and were told that parade was at 9:15am and that we were leaving at 9:30am. After a couple of kilometres cycling, we ended up just following the leaders. On the way, Gary bought us a drink, although I spent most of the time fixing my broken panniers (thanks Ross)! Once we arrived at the campsite, we all played basketball, football and table tennis. Next, we all had showers before we went to the campsite’s restaurant. That night was brilliant! 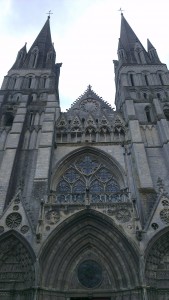 With Ben’s lion king re-enactment, Denver’s singing and Martin and Adam B’s interesting songs, the evening went out with a bang! The best way to finish any scout camp! 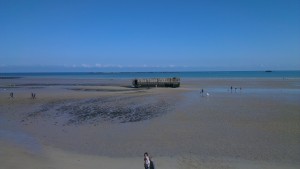 At 6:00am, the dreaded sound of a leader’s voice began to wake us up. We had 45 minutes to get ready. Once we were all set, we rode all the river in the spitting rain for about 15-20 minutes until we arrived at Caen Port. We boarded the ferry, and then had breakfast: I had 2 pain au chocolat’s and a bottle of drinking yoghurt. Just what I needed! 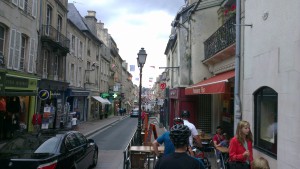 During the journey, we played cards, drew some…colourful diagrams in our booklets and Ben and I watched a film in the boat’s onboard cinema. Once the movie had ended, it wasn’t long until we disembarked off of the ferry to meet some of the parents and the van for the bikes. It was a 2 hour journey to the car park in Burnt Ash where we all said our goodbyes and thanked each other for a brilliant holiday!