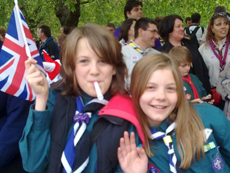 Members of the 25th Bromley were official guests at the Queen’s Jubilee Parade in London on Tuesday 5th June 2012. They all had an amazing day seeing the parade, the queen on the balcony and the fly past by the RAF. Cubs, Scouts and leaders were all delighted to have been part of such a momentous occasion. 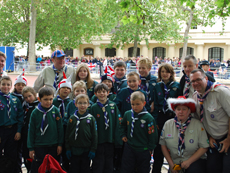 Our Group Scout Leader, Bruce Manning, managed to give Mark Austin of the ITV some deja vous and presented him with a group scarf. He and young people from the group were interviewed about the day. If you want to see the footage from the coverage on the TV, click on the link below.