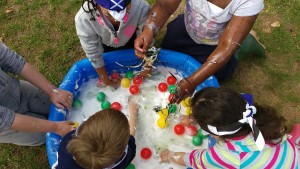 Day 1 the Beavers arrived in the late afternoon sunshine and, once they were all set up in the bedrooms, it was all about Easter with outdoor games, some Beavers learning to build a camp fire and a night time Easter Egg hunt. 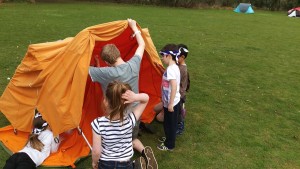 The Scout Leader arrived early evening and the Beavers tents were put up quickly. Then 7 brave Beavers set up their tents ready for spending a night outdoors. The day was ended in true Scout style with a sing song around the campfire thanks to Tony & Sue. 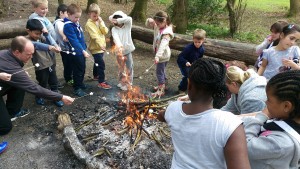 Day 2 dawned slightly misty. The 7 Beavers had survived the great outdoors overnight and were raring to get started by 6.30am!!! Breakfast was at 7.30 and once the Beavers had tidied away their sleeping areas and were dressed ready for the day we began our Bush-tucker trials. Outside in the sunshine there were bases set up for the Beavers – putting up a tent, blindfold taste testing and finally a blindfold feely pool full of gunk, bugs and gold stars. 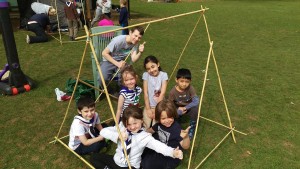 The Beavers tried their hands at a small pioneering project, helped by our Scouts and Explorer, to create a waterproof shelter using canes, elastic bands and a groundsheet for a roof. The Beavers had to sit in it in their teams and wait to see if it was truly waterproof while the leaders poured water over it. The Beavers did a fantastic job and were rewarded with Smores made by their own fair hands around the campfire.

We rounded off a great camp with the investiture of 7 Beavers into the section, congratulations to each of them.

Well done to all who took part!!