The Beavers took part in their very first sleepover ‘Camp’ at Wilberforce on the 19th-20th September. The three Patrol Leaders from the Scout section also joined us and helped to run some activities with the Beavers.

The theme was The Wild Wild West and Beavers, Scout helpers and leaders alike all got into the spirit of things and dressed up as Cowboys and Red Indians, one leader taking it to the extreme and arriving complete with a blow up horse costume! 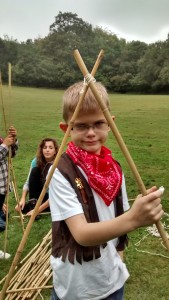 Upon arrival, 9 out of our 15 brave Beavers decided that they were going to sleep outside for the very first time with 4 of them actually making it through the night under canvas. Well done to them!

A wide game was set up by our Scout Helpers and the Beavers enjoyed the hide the VIP game with flashing lights attached to their VIPs.
Then the Beavers all enjoyed a sing song around the campfire followed by hot chocolate and smores before a (very) late night. 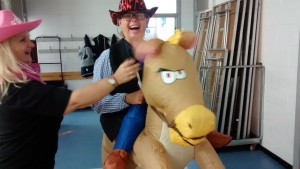 During the following day, Beavers learnt the basics of how to lash bamboo canes together to make structures and frames, how to put up a simple tent and (under the expert tuition of one of our resident Scout Leaders for the weekend) lay and light a small fire.

A very well done to all Beavers who took part and a massive thank you to our Scout Helpers and leaders, without who the weekend would not have been possible!