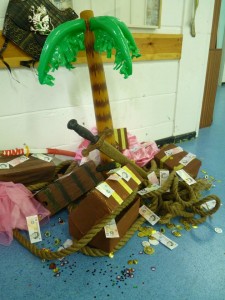 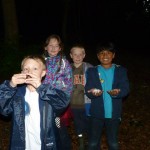 We all arrived on the Saturday afternoon with the Beavers very excited, as this was the first time away for all of them. The afternoon was spent in fancy dress on the activity centre outside with the Beavers turning it into a pirate ship for their role-play.  We then came inside to make tie-dye bandannas which 2 of the leaders dipped into some bright coloured dye and hung up to dry for us.

After dinner we all had to wash up our own plates and cutlery before we could go outside and play a wide game where we had to find different pieces of silver and gold to fill our treasure chests.  After that we had a camp-fire and we learnt and acted out some very silly camp-fire songs before toasting marshmallows to make smores. 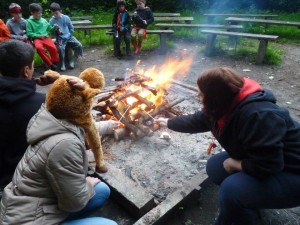 Then it was time to go back inside for hot chocolate and Skull had another surprise for us.  We were allowed to stay up and watch Pirates! In an Adventure with Scientists DVD before bed.  We even had some popcorn to have with our hot chocolate.  We stayed up late but were all in bed and asleep before lights out.

On Sunday morning we got up and had breakfast – we had to wash up our stuff again before our craft was ready to do. We made some Father’s day photo frame cards as it was Father’s Day and then we made tropical fruit kebabs for snack time.

After that we all went outside and played parachute games and then had a quiz called ‘I’m a Pirate get me out of here!!’ so that we could win more treasure for our treasure chests. 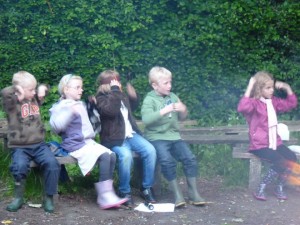 We were so hungry by then that we were glad when it was time for lunch. While we were eating the leaders counted out all of our treasure and decided on a winner. Then we had some free time to play games and tidy up our bedrooms. 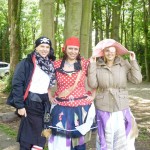 Now it was almost home time and we had to put on our uniforms and get ready to go home.  Skull had lots of badges to give out and we all won some chocolate prizes for the games we took part in.  One of our new Beavers was also invested at the end of Sleepover along with 2 Beavers from the 27th Bromley.  All of our parents were there to collect us after that.

Thank you to all that made this sleepover possible – we all had a fantastic time!