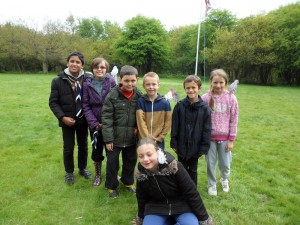 We started the weekend off by investing a cub at the start of camp. We then split the cubs into teams “Polly Parrot’s” and “Jolly Roger’s”. We then spent the weekend dressed up as pirates and all the activities were pirate themed.

We had 10 cubs attend the whole weekend with 2 day visitors on the Saturday. The weather was good for us and we all slept outside in tents.

The cubs also designed and painted/coloured a flag, coloured and made a parrot that sits on your shoulder as well as stuck and made pirate hats/masks 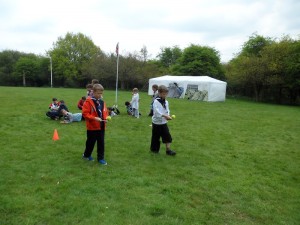 Over the weekend the cubs enjoyed a treasure Hunt, wide games, find the hidden treasure camp fire and a hike.

All the cubs enjoyed the freedom of the campsite, especially the sea of Blue Bells everywhere.

All the cubs that attended camp were awarded their awards on Sunday at flag. The team winners were “Polly Parrots” and Teddy bear of camp was won by a teddy dressed as “Darth Vader”.

Cub Camp booked for 4-7 May 2014. We are going to Walton Firs Scout Campsite.