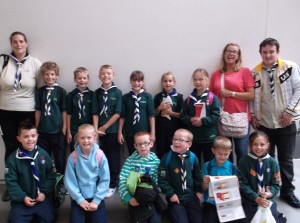 The Cubs and Leaders met at Grove Park train station. We travelled on a 136 bus to the Elephant and Castle. we then took a short walk to the museum.We all decided to eat our lunch in the gardens before we entered the museum. We joined the queue, where we met up with another Cub group.

Once inside the museum we had a group photo taken and split up into smaller groups. we started at the top and worked our way down. We saw various art galleries, a test missile, tanks, jeeps, spitfires and much more. We were stopped by an American Scout and spoke for a while. We ended the trip with a visit to the museum shop. We let the cubs let off steam in the play ground before our trip back.

When we arrived at New Cross the cubs were met by Rama with a special bus ready for them. He took us into the garage and took us threw the bus wash several times. He dropped us off at Sainsbury’s where Akela treated the cubs to a cold drink. We then boarded the last bus to our destination, Grove Park where the parents were waiting.