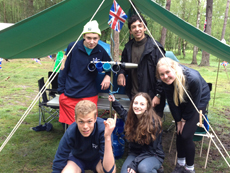 Our Explorers made full use of the extra long bank holiday weekend for the Queen’s Diamond Jubilee by camping in the Ashdown Forrest. The camp had a ‘Best of British’ theme which involved dressing up and also decorating our site with a plethora of Union Jacks.

The first day started with the Explorers being taken out on a day drop. This consists of being taken to a secret location, about 10KM from the campsite blindfolded and given a map and compass. The Explorers then needed to find their way back using their skills and teamwork. Both teams did make it back, having covered surprisingly different distances. 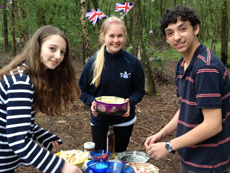 Following heavy rain and low temperatures  a day of sailing at Bewl Water where the group has two boats had to be postponed, however the unit used the day to take on some challenges to light fires with only one match (pretty tricky in wet conditions) and to make camp gadgets using their pioneering skills. The day was then finished off with an epic non-stop cricket match and then homemade pizzas cooked on an open fire (pictured).

The weekend continued with further challenges and games, including an eye catching game of volleyball between the patrols.