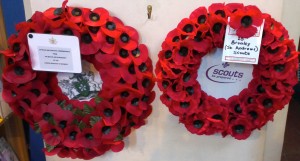 Beavers, Cubs, Scouts, Explorer Scouts and Leaders all joined the rest of the nation today in two minutes of silence for Remembrance Sunday at church parade in St Andrew’s Church. Those who had made the ultimate sacrifice for their country and our relatively peaceful existence were remembered in a service given by Rev Liz Davis and Rev Angela King. Members of the parish who had lost their lives in conflict were read out and two wreaths, one from the Scout group laid by a Scout, were laid in memory of those who had lost their lives.