Since it’s inception back in October 2011, Chill out Camp for the Scout section has become somewhat of a tradition having taken place now four times in the past five years. So much so, other sections seem to be taking on the idea and doing their own version. We’ve been away in October through to December (really cold) in that time and this time decided to go for early October in the hope that we would catch the tail end of the warmth left over from the summer, we were delighted to find that to be the case. 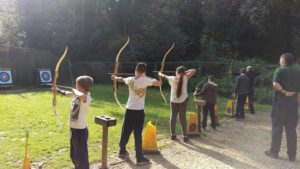 The Scouts arrived on Friday night and to their credit they set up their tents and dining shelters in the darkness, in amongst the trees. We managed to collect enough wood to have a modest fire after we had enjoyed hot soup.

Saturday was an activity day with both rifle shooting and assault course lined up. Under the instructions of the team at the campsite the Scouts made really good progress with their aim on the range, which is either really good or slightly concerning (you decide). The assault course was a real laugh and we had a go at some friendly competition before the Scouts had a free run of the course. Even some of the leaders had a go! With some scouting skills and a wide game thrown in for good measure, the day was rounded off in perfect style by a handsome campfire with good cocoa and good company putting the icing on the cake. 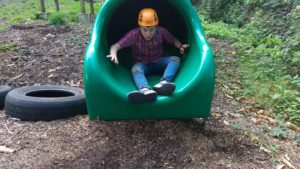 Before packing away the Scouts managed to catch some sunshine whilst learning how to use a bow on the archery range. They did very well but not to be outdone I managed to get the arrow right in the bull!

The weekend was good fun and we are looking forward to carrying on the tradition later on this year.