Scouts & Explorers Have a Blast at Quasar 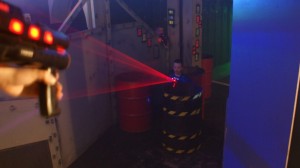 The Scouts and Explorers got together this week and went to Quasar Elite on Bromley Hill for their meeting. All of the Scouts, Explorers and their leaders, 34 of them, were split into two teams to do battle in the Quasar arena.

The blue team dug in at their base in the high ground, while the red team took position at theirs on the lower level. After 30 minutes of intense battle, the scores were revealed to both teams. It was an emphatic win for the red team, taking victory by what can only be described as an embarrassing margin of 177 to 1187. Sean, one of the Scouts, also managed to beat the high score and bagged himself 10 free games!