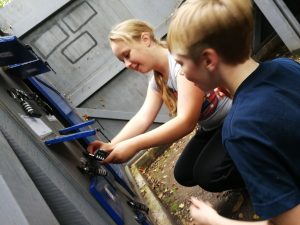 It was time that we went to camp again, having not been away since May bank holiday. The troop went to Walton Firs in Cobham, Surrey for a weekend of activities with a generally chilled out atmosphere. Friday night, as always, was all hands to the pump to get tents and dining shelters up, which inevitably was done in the dark. Of course the Scouts took this in their stride and enjoyed the fruits of their labours, hot dogs.

Saturday morning was full cooked breakfast, as always cooked by the Scouts themselves. They then went to the site’s new maze, which was a combination of finding their way and solving puzzles to be the first team to raise their flag in the castle at the centre. 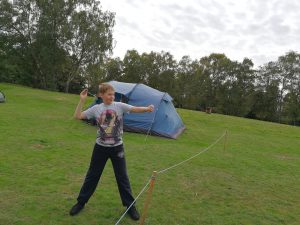 The Scouts came back to site and after a well earned drink break, they constructed their own dutch arrows. These arrows are thrown by hand, with the addition of a string tied at the tail end of the arrow, connected to the hand at the point to give it extra distance when thrown, with excellent effect! We then had a competition to see who could get theirs the furthest and most accurate.

After lunch everyone had a go at air rifle shooting, with everyone improving under the tuition of the site’s instructor. Many started not quite hitting the target, but everyone was scoring respectable scores by the end of the session. The night was completed with stew for dinner and then cocoa round the campfire before bed. 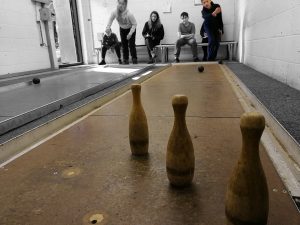 As always with a weekend, it felt like we were packing the site just after we arrived. However before we tackled that job, we all went to the skittle alley and played a few legs of skittles. By this time the sun had come out and the unseasonably warm weather dried the tents from the morning dew. Everyone had lunch and then got cracking with packing the site away before coming home.