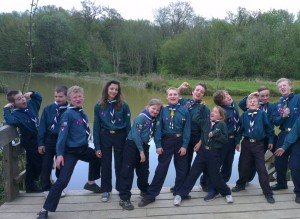 Our camping season has been well and truly kicked off this bank holiday weekend with the Scout section travelling to a sunny Brentwood in Essex to stay at Thriftwood International Scout Camp and Activity Centre. The section headed off for the first camp of 2013 for the group with 13 Scouts and 4 leaders. Transportation to the camp was in the slightly unusual form of a red bus, which gave the journey a slightly different vibe.

Having set up the site quite late into Friday night, Saturday saw the beginning of the weekend’s activities starting with the essential wood collection for the camp fires followed by the 25th Bromley favourite of a game of volleyball. After lunch, the troop split into two groups. The younger half of the troop got to know some basics of camping, which culminated in each of them using pioneering skills to create a useful camp gadget for the rest of the camp. The older half began the process of training for and planning their impending expedition to the hills of the west country for a overnight wild camp. Before dinner time, the troop joined back together and went and had a go on the site’s demolition derby, a gladiator style inflatable with the aim of knocking your opponents off of their pedestal. The Scouts then cooked their dinner, as they do with all of their meals at camp, and then enjoyed a long camp fire with cocoa and biscuits.

Sunday started with a very welcome full English and an equally welcome dose of British sunshine. The morning’s challenge was for the troop to build and sail two rafts using only pioneering spars, barrels and ropes along with their tried and tested pioneering knots and lashings. Both groups managed to successfully complete and sail their rafts whilst enjoying the sunshine. Neither raft sank and both teams took part in a race around the lake, which is testament to the build quality of the Scout’s rafts. Following lunch, the Scouts and Leaders took on the 25th Bromley Thriftwood Open Plate Golf Championship, a Frisbee inspired golf game played in the woods. 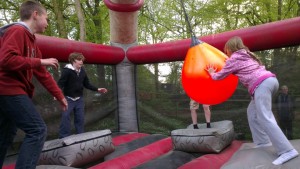 Following this the Scouts took some free time to organise their own game in the woods before dinner. The day was then topped off  by three members of the troop being invested in with the backdrop of the lake and then a wide game followed by a camp fire.

Monday, the final day of camp, was mainly dominated by the whole troop working hard to pack the site. During the morning however the Scouts took part in crate stacking, a test of balance and teamwork to build up a tall platform of crates in pairs without falling off! Everyone had a go and did very well. The site was then fully packed away in time for the winning patrol and Scout of the Camp to be presented before heading home.