We’ve just returned from our first camp of 2015 over the bank holiday weekend. We’ve enjoyed a packed weekend of activity at Walton Firs in Cobham, Surrey for the long weekend. Having put all of the tents and dining shelters up, Friday ended with a warming cup of soup before going to bed. 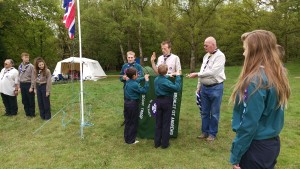 The real activity started on Saturday as the Scouts kicked off by cooking themselves a full English breakfast in their dining shelters to set themselves up for the day. Parade was a bit more special than normal as we were delighted to invest two members into the troop, making their promise in the most appropriate of places, whilst on camp. 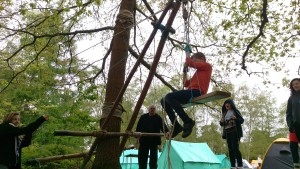 The big project of today was to use our pioneering skills to make a fully functioning Swinging Derek that would allow us to pick up and transport a Scout in and out of the ravine running through the site. With just wooded spas, rope, pulleys and sacking the Scouts managed to construct and impressive structure that indeed worked as intended. They then mastered it’s operation and used it to great effect. 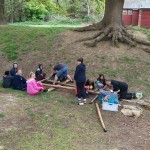 Once we had dismantled the Swinging Derek, the troop engaged in a game of rounders on the playing field before cooking the evening meal of sweet & sour chicken and rice, again cooked by the Scouts themselves. We rounded off the evening with a wide game, before rain stopped play for the night. Sadly the wood we had collected for a fire laid dormant under a groundsheet, waiting for dry weather to allow us to have a fire. 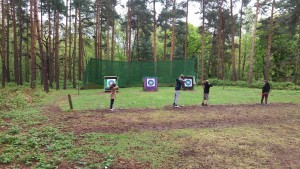 The rain continued through the night, but thankfully it subsided in time for our morning sessions of archery on Sunday. We split into two groups and took it in turns with the archery and working on safe use of knives at camp. Both teams showed their prowess with a bow and thoroughly enjoyed the experience. The Scouts were also able to refine the vital skill of being able to safely whittle with a knife at camp, essential for those moments when you need to make that camp gadget that’s going to make life on camp that bit more comfortable.

The sun made a welcome appearance late morning, which meant that we were able to get back up onto the games field where we played a lively game of ultimate Frisbee. For the uninitiated this is a cross between Frisbee, american football and netball, a potent mix of games I’m sure you’ll agree. The wind came up during the game, which made the flight of the Frisbee interesting, but again the weather intervened as big gust blew over one of the dining shelters. It was all hands on deck to put the shelter back up and to storm lash all three to stop a repeat. 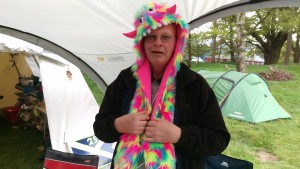 After lunch the Scouts had some free time with the Nerf balls, stomp rockets and Frisbees. They had a chance to go and visit the shop onsite as well so that they could stock up on some much needed supplies (a.k.a. sweets). Dinner was spaghetti bolognese and was followed by a challenge to gather and identify as many different leaves from trees. Credit where credit is due, the Scouts did rather well at this. It was then time for a fire, but we weren’t going to just light it now! The Scouts were given an array of items without a clear way of lighting the fire. After a bit of discussion and trial and error, they managed to start the fire with a battery and some wire wool, much to their delight as they hadn’t had a fire yet. We had cocoa, biscuits and of course marshmallows coupled with good company before turning in for the night. 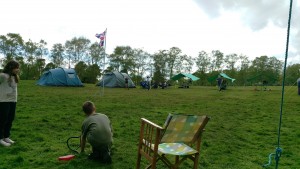 Monday was a gloriously sunny day, which meant that packing away was a breeze and the tents went away dry. Before that however, we had a game of skittles in the site’s skittle alley, which went down to a tie break and was decided on the final bowl! We packed away and presented the prizes for patrol and Scout of the camp. It was then time to head home, unpack the van and plunge into a deep sleep ready to go back to work.