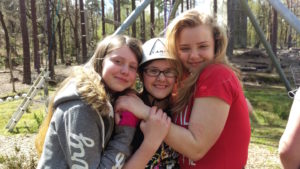 Broadstone Warren in the Ashdown Forest is one of our favourite places. We haven’t taken the Scouts there for a couple of years so decided to return to the almost 400 acres of mixed woodland that is one of the best places to camp anywhere. As always, we took full advantage of the bank holiday weekend, camping from Friday night through to Monday afternoon. 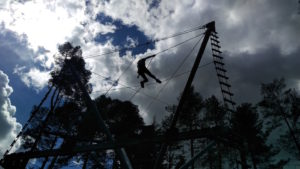 Friday was the usual race against the sun as it set on the campsite while we pitched tents, shelters and the mess tent. We managed to get it all up in a reasonable time and were fortunate to have a site with plenty of wood close to hand. There was obviously only on thing to do at this point, have hot dogs around the fire before turning in for the night. 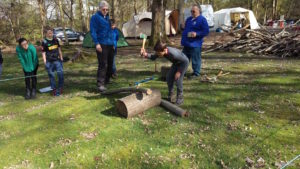 Following a chilly night, although Saturday into Sunday proved colder, we had a cooked breakfast and went up to the high ropes area to take on the cube course. All of the Scouts had a go at what can be a very daunting and difficult challenge, dangling high above on a single safety rope! Everyone gave it a really good go, with almost everyone making it all the way to the end at the top of the cube. In the afternoon we got back to some Scouting basics and worked on axe an saw skills with the Scouts, who then cut up some wood ready for a much needed fire. As night started to fall we all played a wide game, followed by hot cocoa round our fire. 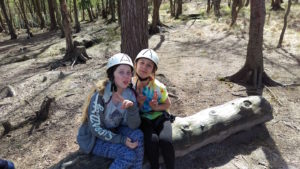 With the overnight temperature dropping to almost zero, it was good to wake up to a nice sunny morning. We made the most of the weather by exploring the campsite and doing the orienteering course set out around the whole site. Given the size of the site this was no small task, which the Scouts did really well at, eventually solving the puzzle.Before lunchtime we had a real treat of going on the site’s 140m zip line, which was absolutely brilliant. The Scouts each got to go on it twice and ended up mostly going down it with no hands. We rounded off the day with a game of cricket, a wide game and some more cocoa around an even better fire. 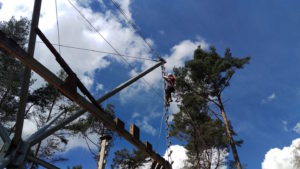 Monday brought with it the rather unwelcome change in the weather that meant tents were going to have to be put away wet. Nonetheless the Scouts and leaders worked hard and got everything packed away in the van with plenty of time to have a game and some lunch before it was time to head home.

The Scouts were a real pleasure to have along this weekend and we are really looking forward to going away again in July, this time to Germany!