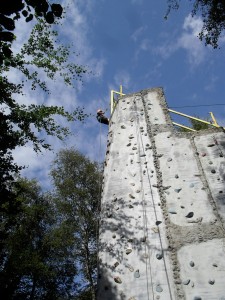 Summer Camp this year took place in the beautiful setting of Ferny Crofts, a Scout Activity Centre based in the heart of the new forest national park. The site had not been visited by the 25th Bromley for 12 years and was a new experience for the Scouts and half of the leaders. 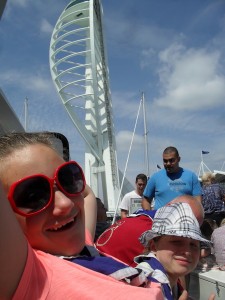 A late arrival on Friday night after a disastrous mix up with our vehicle hire meant that a few tents were put up for us to sleep in for that night. As it was after the site curfew Ian and I put them up quickly and in silence, ready for us to get in and put our heads down for the night.

Saturday was a hot day, which made putting up the tents, setting up the kitchen area in the mess tent and settling in to the site really sweaty. Regardless, the Scouts and leaders worked really hard and got the site, wood pile and everything else ready for us to start enjoying the activities planned for the week ahead. We rounded the evening off, as always, with a mug of Tony’s famous cocoa around the fire.

Sunday was our first day offsite, a trip into the Forest on mountain bikes for the whole troop. We split into two groups and collected our bikes from the activities team on the site and headed off down the road to the cycle paths in the forest. The Scouts took it in turns to navigate us through the tracks, paths and roads that we took to get to our lunch stop, a bbq in the Forestry Commission picnic area. The then tired Scouts, having covered upward of 10 miles, were ferried back to the site by minibus.

Following the fevered activity of the first couple of days, Monday took a more relaxed approach to the day as we remained onsite. The troop was split in two and they alternated between orienteering around the campsite on a pre-set course and having a go on the 60ft mega abseil! The orienteering course was challenging but the Scouts put the skills they had gained prior to camp to good use and did very well. The abseil tower was a daunting beast, but full credit goes to the Scouts as almost all of them had a go, even one of the leaders who’s not great with heights managed to have a go when there was time to squeeze one in.

Tuesday and it was time to head out offsite again. The whole troop was issued their brand new New Forest 2014 t-shirts ready to head out for a full day of activities. First out, we headed over to Beulieau Motor Museum down the road for a day looking at some stunning cars, old and new, a falconry display, simulator, monorail and much more. Everyone enjoyed the fantastic array of things to see and do, complimented by the excellent weather.

Once we had finished for the day, it was time to head straight back out again to Poole. Despite one Scout bringing their swimming trunks as they heard the word Poole, we were actually off to the dogs for the evening. The Scouts were challenged to try and pick the winners and the leaders placed some money on their chosen dogs, the resulting leftover money (what was left of it) was turned into points for the patrol competition. In fairness to the Scouts, they seemed to do better than the leaders for the most part.

Wednesday was another day on site, a fairly chilled out affair with plate golf in the woods, effectively golf using trees and frisbees, and volleyball. These games were punctuated by the more traditional site service that the Scouts rendered to the service crew, this time consisting of a litter pick. This is good for the Scouts to do as they can have a positive impact on the environment they are staying in, give something back to the service crew who work so hard and it also helps them achieve one of their challenge badges.

As night fell the Scouts were taken on a suprise late night hike, a “Night Drop”. They were blindfold and taken with one leader per group to a mystery spot in the forest and told to get themselves back to the site. Both groups did very well, overcoming significant obstacles in the dark to make it back to camp for a quick cocoa round the fire before turning in for the night.

Thursday was our final full day before the packing operation was to begin on Friday afternoon. We all headed over to Portsmouth for a day to go on board the HMS victory and to take a harbour tour on board a tour boat. Before we could even get to the Victory the boys were busy talking to the two armed lady officers on duty about guns, pepper sprays etc. The victory was very interesting to see, even if the beams were a little low for some leaders’ heads! The boat tour in the glorious sunshine was a real highlight, followed by a bit of free time for the Scouts to roam around the quay while the leaders sampled the local ice cream stand!

Friday morning was a chilled out affair, where the Scouts could relax and do whatever they fancied. Most chose to busy themselves playing games or just sat down and had a chat. After lunch the pack up operation began, with the weather now finally going against us it was a race against time to get as much canvas down as we could before it rained.

Summer Camp 2014 was an excellent week, as always, thanks to the Scouts for being such a good laugh through the week. Plans for Chillout Camp 2014 and of course Summer Camp 2015 are underway!