Having visited a full blown activity centre for Summer Camp in 2014, 2015 took the troop to the opposite end of the scale. The venue for this years week long camp was Horner Wood, a small Scout campsite within the Exmoor National Park just six miles from Minehead. Horner Wood is a collection of four camping fields nestled in a picturesque valley surrounded on three sides by tree covered hills with a crystal clear river running its way through the middle of the site.

Despite a vehicular crisis before the start of camp for the second year in a row, we arrived at site safe and sound with plenty of time to get all of the tents set up for our first night. The Scouts had their tents lined up along the bank of the river, giving a peaceful trickle of water in the evenings to fall asleep to. All of the dining shelters, store and mess tents also went up in good time.

The Campsite in all it’s glory!

Our first full day on site was a bright and sunny one. Today’s challenge was to build a structure over the river from the two sides to transport equipment across, without it getting wet. Both teams had to remain on their side of the river throughout and all they had was rope, pioneering spas, pulleys and their pioneering skills. This was no small task and both teams pulled together through the course of the challenge and managed to construct a pulley system between two A frames that they managed to build and sufficiently anchor.

Sunday was to be the start of two big days for the whole troop. In the morning we split into two groups, one group of the younger members of the troop and the other group those looking to complete their Expedition Challenge Badge. The younger group headed off with Caron and Jack, armed with their hiking gear and a packed lunch and headed for Dunkery Beacon for what would be a tough but ultimately rewarding hike to the designated lunch spot. 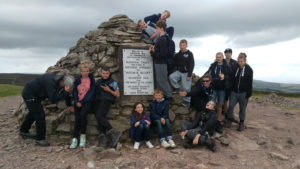 The older group were carrying out the final stages of their Expedition Challenge, which involved a number of weeks of training in navigation, equipment and fitness as well as planning the route and equipment needed for a two day/overnight expedition. As a result they needed to carry everything needed for the next 24+ hours including but not limited to food, clothing, cooking equipment, sleeping gear, tents etc. Everyone met at lunchtime at the top of the Beacon for some stunning views over the Exmoor National Park before splitting off. The younger group were picked up from the road and went back to site to play plate golf and to build camp gadgets the following morning. For the older Scouts the physical and technical challenge of the expedition had just begun! 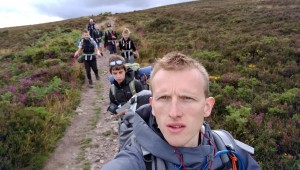 The afternoon was primarily downhill (literally speaking), however tired legs and minds were showing as pace and navigation quality were sliding. However, after a little challenge finding our destination campsite, we set up camp and started cooking our boil in the bag meals, which taste amazing when you’re hungry and tired. The five Scouts, Ian and I then spent the evening enjoying a small campfire and the endless peace that we had managed to find ourselves in, in our secluded little clearing in the woods. 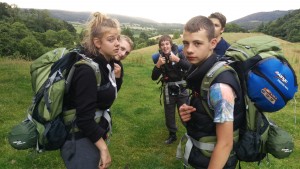 Monday morning and the subsequent breakfast brought with it renewed energy and enthusiasm from the Scouts. We packed the site up back into our bags, filled up water bottles and headed out for camp once more. Oddly sunny and rainy weather made the journey back to site interesting and provided the Scouts with more experience of dealing with changeable weather in hilly terrain. Our return to site for a late lunch was very welcome and good opportunity for a shower and a couple of games to round off the day. 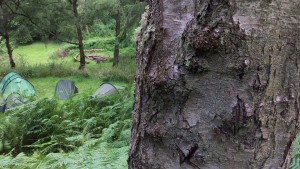 Overnight camp for the expedition

Tuesday was dominated by poor, rainy weather and so Wednesday was a real chance to get offsite and do something exciting. We headed over to Wimbleball Lake for a day of water activities. All of the Scouts and three of the leaders spent the day Paddle-boarding (which none of us has ever done before), canoeing and rafting. We were split into two groups and took it in turns to have some tuition and the the obligatory games and messing around that comes with this sort of thing. The final session on the rafts was direct competition between  the two groups, which comprised of races and generally mainly spending our time out of the raft and in the water! The Scouts managed to squeeze in a quick go at axe throwing to top off a brilliant day! Back at site, the evening campfire was made even better when we were treated to an awesome light show of stars, satellites and shooting stars. 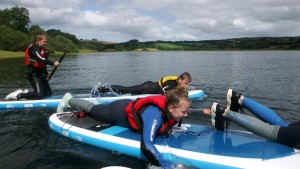 Thursday was warm and Sunny, which was perfect for a day of mad water games and volleyball. It was also a chance for many of the Scouts to experience a Somerset Cream Tea for the very first time. Many were instantly converted, others I am sure will come around with time and indoctrination! 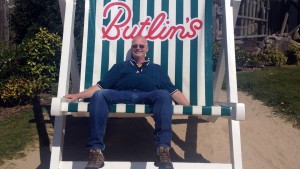 Our final day on camp was our mystery day out, which was a day out at Butlins in the nearby Minehead. The Scouts (and truth be told the leaders) had free run of the whole park to do as they pleased for the day. Some chose to go swimming, crazy golf, go carts and many other activities. One of the Scouts even had a fight with a seagull over his sandwich (he lost), which was met with the usual level of sympathy that would be expected. A final chance to do some shopping and to spend some time exploring came after Butlins with a trip into Minehead followed by fish and chips.

Sunday was pack up day, which was thankfully dry and meant we had dry tents to go home with. Planning for Germany 2016 starts now!